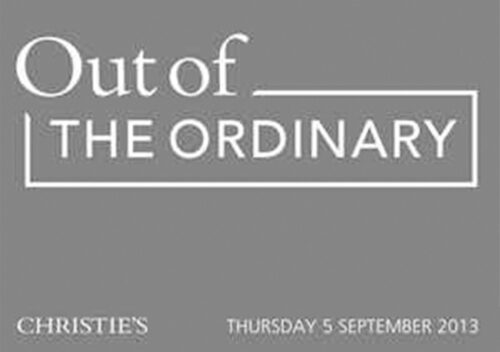 Pascal visits ‘out of the ordinary’ at Christie’s

Pascal is a lover of auctions, and will be visiting a Christie’s auction in South Kensington on Thursday (5th September), which will be, as the theme promises, “Out of the Ordinary”.

It will be a day to pick out something ‘a little different’ as 155 lots feature ‘striking’ items from around the world will be displayed, many of which have very intriguing stories to tell. It is customary to have variety at an auction, but this is eclecticism on an almost unimaginable scale. Car parts sit alongside bones, illuminated eyes peer down from the walls as a shark-crossed-women sculpture stalks the floor… but Pascal has his eye especially on the small collection of robots. There are two unusual and rare examples from the 1950s up for sale.

The first of these is ‘Mechanical Man’ a British made steel Robot from 1950, designed by Meccano. Bright red and green and a metre high, he has a bright and cheeky look about him that makes us think he’s fit in well at HOME. He still has a working motor, enabling his legs to move and his head to turn from side to side, so Pascal would have to watch he didn’t wonder off!

The other, named ‘Cygan’ is an Italian aluminium robot from 1957, designed by Dr Ing Fiorito. This robot measures 254cm (100 inches) tall from its huge silver ‘feet’ to the top of it’s green Perspex Mohican. Although it can no longer walk and talk, its mouth remains hanging open and the green antenna are still on full alert, awaiting instruction. He would naturally make a great big brother for Gort!

If you like your own space a little more quirky and unusual, or fancy a break from conventional decoration, have a look at the catalogue online or pop down on Thursday and just see what you can find!